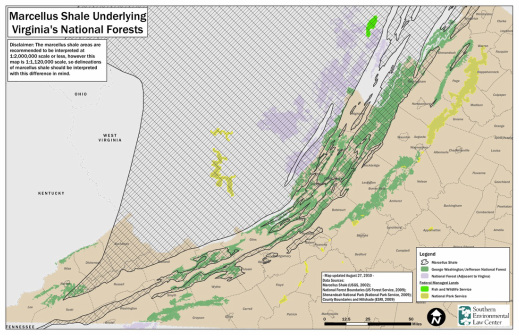 The 1.1-million acre George Washington National Forest contains many of the largest unfragmented roadless areas remaining in the eastern United States.  The GWNF lies primarily in the Allegheny Mountain range in western Virginia with some sections on the Blue Ridge and Massanutten mountains.  The mountain ridges provide prime habitat for black bear, migratory song birds, bobcat, and rare bats and salamanders, along with pockets of beautiful old-growth forest and little-seen flora.  Less than two hours from Washington, DC, the GW is an oasis for back-country recreation such as camping, fishing, hunting, hiking, backpacking, mountain biking, rock-climbing, and bird-watching.  Elevations range from around 1200' to nearly 4500'.

Threats
A large portion of the GWNF is underlain by Marcellus Shale, which could make some of our most special places a target for natural gas development by hydrofracking.  Although the new GWNF Management Plan, released in November 2014, makes almost the entire GWNF off limits for energy development, this decision is only good for the 10-15 year life of the plan.

Wind developers have eyed the high mountain ridges in the GWNF as a site for industrial wind development.  This large-scale development would destroy the natural character of our National Forest and would have a particularly negative impact on birds, bats, and other wildlife that need unfragmented forest.
New Forest Plan
The GWNF developed a new Management Plan, which was released in November 2014.  In preparation for the new plan, the Virginia Wilderness Committee and The Wilderness Society published Virginia's Mountain Treasures:  The Unprotected Wildlands of the George Washington National Forest (2008).  From this inventory VWC identified the most outstanding candidates for permanent protection and recommended them to the GWNF.

Work with Stakeholders (Read more)
During the GWNF planning process, VWC began to collaborate with representatives from timber, game management, and recreation, as well as other forest preservation groups.  This collaboration led to a signed agreement supporting some of our top candidates for Wilderness and National Scenic Area designation.   VWC in turn supports an increase in management for wildlife habitat by timber harvest along the periphery of core areas which would be designated as Wilderness or National Scenic Areas.