From the President: 2021 and Beyond

​            The past year has been a busy year for the folks at the Virginia Wilderness Committee (VWC). The staff and board have made great strides in moving several major projects forward and have positioned VWC for a banner year in 2022. As you read our newsletter, you will see what I mean.
The Virginia Wilderness Additions Act, designating an additional 5,600 acres of the national forest in southeastern Bath County as Wilderness, passed the Senate in the last congress but failed to pass the House. This year it has passed the House as a part of a larger lands package and Senator Kaine reintroduced the legislation in the Senate. We have great hope that it will pass the Senate and be signed into law in 2022.
Privately held mineral rights under our Wilderness proposals in the Shenandoah Mountain National Scenic Area have always been a cause for concern. The Forest Service is reluctant to support Wilderness areas that have privately held mineral rights. This concern has pushed VWC into a role it has not taken in a couple of decades. We are actively working to have the minerals rights that were severed from the land over 100 years ago transferred to the Forest Service. We have made great strides in the effort in 2021. We hope to finalize the purchase of these privately held mineral rights under our Little River Wilderness proposal and transfer them to the Forest Service in 2022. This will allow us to begin work on retiring the rights under our proposed Lynn Hollow Wilderness.
Work on retiring the mineral rights is just one part of a larger effort to protect Shenandoah Mountain. VWC board members have worked tirelessly on securing endorsements for the proposal. They have secured resolutions of support from local governments. They have kept the George Washington National Forest Stakeholder Collaborative abreast of our efforts, and the Collaborative now supports our legislative campaign. They have developed the maps necessary for a legislative effort. They have been in contact with our lawmakers, keeping them informed of our progress on the ground. All these efforts point toward a possible introduction of a bill into congress in 2022.
The maps for the Monacan Rural Historic Districts were all finalized earlier this year. In January 2022, VWC will begin efforts to build the support necessary to make a recommendation to the Commonwealth that there is enough support at the local level to study the areas for inclusion in the Rural Historic District program.
The Virginia Wilderness Committee is a small organization, but thanks to our dedicated staff and board we have made excellent progress in moving toward our goals. The year 2021 laid the groundwork for an exciting 2022. Stay tuned!
Sincerely,
John Hutchinson, VWC President

Mineral Rights: Getting down in the dirt!

The Virginia Wilderness Committee (VWC) continues its work on retiring the privately held mineral rights under the Wilderness proposals within the Shenandoah Mountain National Scenic Area. Privately held mineral rights are mineral rights that were severed from the land when the land was originally acquired by the Forest Service. The owners of the severed mineral rights are allowed reasonable access to their rights.
Congress has designated a couple of Wilderness Areas in Virginia that have privately held mineral rights, but these have usually been small areas where the ownership is hard to determine. In this instance, the Forest Service has said it will not support a Wilderness designation with privately held mineral rights. There are three tracts under Little River, two of which are sizable with traceable ownership while the third is much smaller and there is no clear chain of title.
VWC is focusing its efforts on the two larger tracts, S-17B and S-3. Through title searches, we determined that Tract S-17B is privately-owned and Tract S-3 is owned by a major corporation. VWC then hired a mineral appraiser to do a mineral evaluation for the two tracts. The evaluation took several months, but it has now been completed. With this information, VWC has been in discussion with the owners regarding the sale of these rights. It should be noted that the Forest Service is supportive of this effort.
We are making good progress toward an acquisition agreement with one of the rights holders and believe that progress raises prospects for a similar agreement with the other rights holder. Acquiring these rights, which will then be donated to the Forest Service, is a necessary step towards Wilderness designation. But funding is needed to acquire these rights, and VWC is appealing to its friends and supporters to contribute to this important campaign. Please consider a donation today. 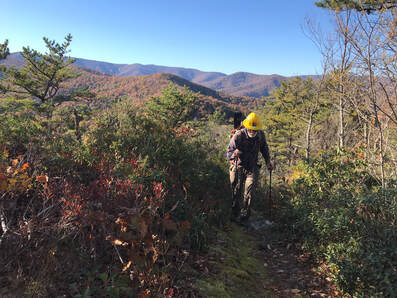 PATC trail worker, Malcolm Cameron, in proposed Little River Wilderness by Lynn Cameron
After 20 years of collaborating with diverse interests and developing public support across the region, we are ready to ask Senator Kaine and Congressman Cline to introduce legislation that will permanently protect our proposed 90,000-acre Shenandoah Mountain National Scenic Area (SMNSA) with four embedded Wilderness areas. Who knew what we were in for when we embarked on this effort two decades ago!
As we look back, the greatest motivation for both the Virginia Wilderness Committee (VWC) and Friends of Shenandoah Mountain’s (FOSM) persistent work has been the high quality of the Shenandoah Mountain area. Considered by some to be the very heart of the George Washington National Forest (GWNF), Shenandoah Mountain has outstanding natural characteristics, critical water resources, and outdoor recreation opportunities that deserve permanent protection. One of the most scenic spots in the Commonwealth, it provides habitat for a wide range of plant and animal species, some found nowhere else on earth. Legislative protection of this special area will be a gift to future generations.
Our successes include:         Resolutions of support from Augusta County, Staunton, Rockingham County, and Harrisonburg.
Complementing this advocacy and education, local groups have increased stewardship efforts in the proposal area. Potomac Appalachian Trail Club (PATC) has taken on an increasing role in maintaining trails in the proposed Wilderness areas and the National Scenic Area.  Shenandoah Valley Bicycle Coalition has realigned trails in the proposed SMNSA to improve sustainability and built new trails. The Headwaters Master Naturalists are monitoring the Virginia Birding and Wildlife viewing stops in and around the SMNSA. These stewardship efforts send a powerful message to the public. Designation of the SMNSA does not end with legislation. Ongoing stewardship will be crucial.
It's time now for all who have worked on this campaign to step back and look at how far we’ve come. Our hope is that the broad support we have built will make passage of legislation an easy decision for our elected officials. The time has finally come, and we are ready for this next step! 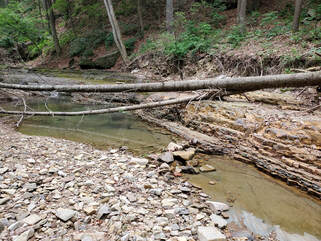 Marshall Run strata in Beech Lick Knob by Dennis Turner
​              Virginia is blessed with a rich natural heritage of wild lands. The George Washington National Forest (GWNF) harbors some of the Commonwealth’s most unspoiled areas with clear mountain streams, century-old trees, songbirds, and breathtaking views. Nestled between Shenandoah Mountain and Church Mountain in Rockingham County, lies our proposed 6,200-acre Beech Lick Knob Wilderness. It ranges in elevation from 1,450 ft to 3,300 ft and contains watersheds for Marshall Run, Blue Lick Run, Root Run, and Seventy Buck Lick Run, all tributaries of the North Fork of the Shenandoah River.
Beech Lick Knob is one of the largest roadless tracts on the GWNF that the Forest Service failed to include in its official inventory of roadless areas. There are 4,241 acres of possible old growth and several large areas of "semi-primitive" acreage where visitors can experience solitude and serenity. Permanently protecting Beech Lick Knob with a Wilderness designation will help maintain water quality in the headwaters of the North Fork of the Shenandoah River; preserve critical habitat for wildlife, including black bear, migratory songbirds, and rare Appalachian salamanders; and safeguard high-quality hunting lands.
Our proposed Beech Lick Knob Wilderness is much smaller than the "potential wilderness area" boundary defined by the Forest Service in the 2014 GWNF Revised Forest Plan, to accommodate trail and other access issues. In our proposal, current uses and access to the area will not change. The Beech Lick Knob western edge is the Carr Mountain Trail. This trail, which is a critical link in the Great Eastern Trail, will remain open to hikers, mountain bikers, horseback riders, and hunters and be outside of the Wilderness boundary. The popular Blue Hole campground is near the northeastern boundary of the area. Grove Hollow Road (FR 302), which goes behind Blue Hole, provides access to the northern side of Beech Lick Knob and will remain outside the Wilderness boundary. German River Road (FR 232) provides access to the western side.
This entire area was home to Native Americans, including the Iroquois, Siouan, Shawnee, and Tuscarora. In 1879, Mr. E.D. Root, an investor from Connecticut, purchased 13,000 acres of this forest land known as Brock’s Gap. He brought ten families south to work for him, remembered today in the name “Yankeetown Road” (VA-819). Yankeetown Road and FR 235 provide access to the eastern side of our proposed Wilderness.
We anticipate the legislation to designate Beech Lick Knob Wilderness to be introduced next year. Wilderness designation will protect this beautiful, remote area in the Allegheny Mountains for generations to come.