﻿From the President:   Year End Report

​The year 2015 has been a significant one for the Virginia Wilderness Committee (VWC). As you will read below, our work on the George Washington National Forest Stakeholders Collaborative was so successful, both in helping the Forest Service develop a new, balanced management project on the Lower Cowpasture River, as well as establishing a viable enough model for future National Forest projects, that it received a regional award last month. Moreover, we are moving ahead with a stakeholder process on Shenandoah Mountain, including helping interested citizens protect an endangered amphibian there.

On a more personal note, in early November, I became President of VWC, some eight months earlier than expected, because of the good fortune of the West Virginia University Press asking Chris Bolgiano to propose a book on wilderness preservation. Both wilderness and VWC will benefit tremendously from her book. So, as we enter the holiday season, I encourage you to continue to support our  efforts for common-sense, balanced wilderness protection by using the enclosed donation envelope to support our work in 2016.

For the Wilderness, Bud Watson, President. 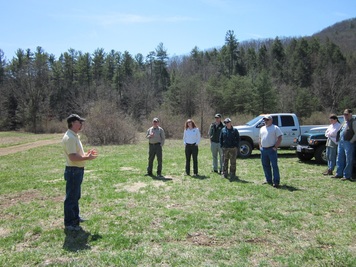 Field trip with forest stakeholders at Slate Lick Photo by Lynn Cameron
As we await a signed Decision Notice for the Lower Cowpasture Restoration and Management Project, VWC has continued to push for a landscape-scale project in northwestern Rockingham County that will again take into consideration a broad range of management objectives similar to the Lower Cowpasture Project.

Despite its present glacial pace, VWC is hopeful that NSM will progress rapidly, now that the Forest Service has committed this part of the forest to become the next large landscape-scale project through staffing changes that will assist in advancing the project. Although no timetables have been set, VWC anticipates that the Forest Service will begin substantive project planning in the near future.

Cow Knob Salamander Photo by Steven David Johnson
A September 19 article in the Richmond Times- Dispatch acclaimed VWC’s own Steve Johnson for his conservation photography. Steve inaugurated a conservation photography class at Eastern Mennonite University, where he’s a professor, and for the past year, he and his students have been photographing Cow Knob salamanders along the route of the Atlantic Coast Pipeline proposed by Dominion Resources to transport natural gas across Virginia. This small, rare salamander is found only in rocky outcrops on Shenandoah Mountain, along with 28 at-risk species of plants and animals. In 1994, state and federal agencies signed an agreement to protect Cow Knob salamander habitat, which may force Dominion to change its routing plans.  VWC took a strong position against the pipeline when it was announced and is a member of a coalition working to avoid its inevitable damage to soil, water, forests, and wildlife. Steve has photographed Cow Knob salamanders in the vicinity of the proposed pipeline route, along with other often overlooked or unseen life in the forest.  “And, oh, what pictures,” wrote Rex Springston, the reporter. “In underwater closeups, salamander eggs look like planets wrapped in gauzy halos. A tree’s roots look like octopus tentacles. Amorous newts look as if their cold blood runs hot. A Shenandoah River beaver looks as if it has slicked back its hair for a date.” But Steve has a vision bigger than just a pretty picture.  Steve lives close to the Beech Lick Knob proposed Wilderness Area and, in fact, has already brought his classes there. His photos open a window to the hidden wilderness of forest life, and, by showing people the beauty and integrity of wild nature, help VWC build public support to protect it.

From the Field Director:
Lower Cowpasture Project is Complete!
by Mark Miller

In 2013, the Forest Service invited public discussion on what has become the largest landscape-scale project on the George Washington
and Jefferson National Forests, the Lower Cowpasture Restoration and Management Project (LC). The LC is a result of the Stakeholder Collaborative, a group of dedicated forest users who came together in 2011 to find common ground on provocative forest issues to accomplish this mutually beneficial agreement. The Stakeholder Collaborative was instigated by VWC, which has shared a leading role throughout both the planning process and Lower Cowpasture. This is a momentous change in the way the agency has traditionally operated, in that it combines a number of former separate activities, including multiple analyses once requiring significant expenditure of staff time and money, into one integrated project planning process. The effort has not only saved the Forest Service both time and money, but also has resulted in a 77,000 acre restoration project. The 1,000 acre Rough Mountain Wilderness addition and the 4,500 acre Rich Hole Wilderness addition are located within the project analysis area, and while the Forest Service cannot designate Wilderness, there is now support for permanent protection from local government, timber, and game interests, as well as recreationalists. These non-traditional allies will assist VWC in achieving permanent protection for these special places-- protection that was considered unimaginable even five years ago. 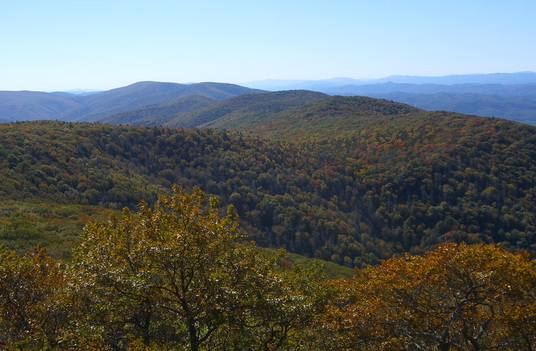 Shenandoah Mountain as seen from Reddish Knob. Photo by Lynn Cameron
As the GWNF Stakeholder Collaborative moves forward with planning landscape-level projects, accompanied by a Wilderness or National Scenic Area designation, we expect the Shenandoah Mountain Proposal to be a part of a third project, with planning to begin in a few years. In the meantime, we are continuing to build public support for the 90,000-acre Shenandoah Mountain National Scenic Area with four embedded Wilderness Areas. Recently, Friends of Shenandoah Mountain co-chair Lynn Cameron made presentations to the Virginia Native Plant Society, Headwaters Master Naturalists, and Shenandoah Valley Bicycle Coalition. Additionally, our Shenandoah Mountain Proposal exhibit was displayed at the Red Wing Roots Music Festival in July. Other efforts range from an updated proposal brochure with striking new photos and quotes from supporters, to several new business endorsers, including Sigora Solar of Waynesboro, bringing the total to well over 230 supporters. You can help build support for protection of Shenandoah Mountain by asking Lynn Cameron (slynncameron@gmail.com) to speak to an organization or by asking a business owner to endorse the proposal. Learn more about the proposal at: www.friendsofshenandoahmountain.org.