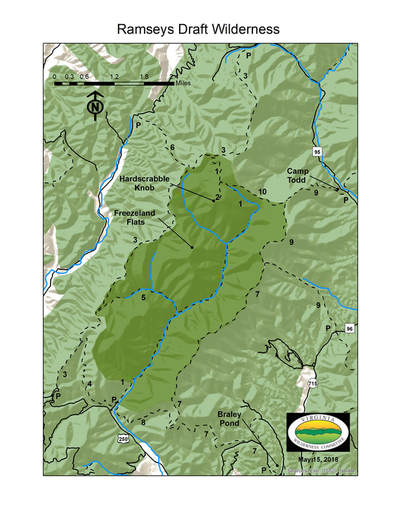 History:
The area was purchased by the federal government in 1913 and has been managed as Wilderness since 1935, the year the Wilderness Society was launched.  The lower portion of the area had been used as a Civilian Conservation Corps (CCC) camp in the 1930s, and the CCC was responsible for creating many of the trails that are used today.  During the Civil War, Stonewall Jackson's army camped near Mountain House Picnic Area, prior to the battle at McDowell.  Mountain House was a tollbooth and a favorite rest stop for travelers along the Parkersburg-Staunton turnpike before the Civil War.  Confederate soldiers constructed the breastworks at the crest of Shenandoah Mountain as a stronghold to keep Union forces out of the valley and the turnpike open.

How to Get There:
Take 42 South to 250 West, go 14.5 miles to Mountain House Picnic Area on Right. The trailhead is located 100 yards up a dirt road from the Picnic Area. Identified by a signboard.  At 0.6 miles the trail enters the Wilderness boundary.

Trail Description:
Ramseys Draft Trail (Trail 1)
This trail (7.3 miles) provides the primary access to the Wilderness, it follows the streambed and the old road (where possible) and crosses the draft about 20 times.  The first stream crossing is about .7 miles in, and at high water, is impassable.  A little over two miles in is the intersection with Jerry's Run Trail.  Less than 4 miles from this intersection is Hiner Springs, a good campsite.

Notes:​
Other trails in and around Ramsey’s Draft Wilderness include:
The Shenandoah Mountain Trail is a segment of the Great Eastern Trail project.